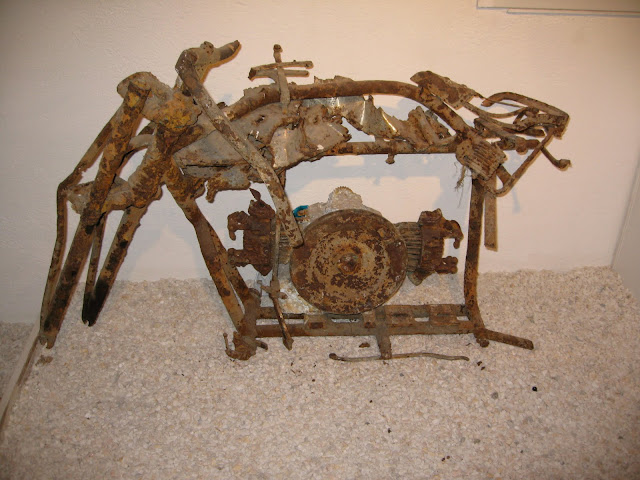 I don't mean to deviate too far from the theme of my blog, which is historic BMW sport and race bikes, but I thought this bike was interesting enough to warrant inclusion.

The pre-war BMW aficionado will note the horizontally opposed twin engine in the fore-aft configuration with a large exposed flywheel.  The motor is an M2B15 BMW fitted to a Victoria KR1.  Those familiar with the history of BMW know that BMW supplied motorcycle engines to independent motorcycle manufacturers before deciding to make a bike of their own construction in 1923, namely the R32.  As such, BMW motors can be found in early 1920's bikes such as the Victoria,  Helios, Flink and Bison.

This bike was unearthed a few years ago by a farmers plow.  The original owner had buried the bike before he went off to fight in WWII.  Alas, he never returned and the bike was entombed for the next 60 years before being unceremoniously discovered.  It now resides in the private museum collection of Franz Amering in Vorchdorf, Austria.

Obviously not a candidate for restoration, it is a great conversation piece with an interesting history.

Those who find themselves on the A1 autobahn in Austria should stop in to Franz's museum.  It is arguably one of the best, and most complete museums of BMW motorcycles in the world.

In a future post I will show some high-lights of Franz's collection.
Posted by Scott Williams at 3:46 PM