In todays world, companies and corporations turn to the web for advertising.  Encouraging "likes" on Facebook, flashing pics on Instagram, and employing an army of "influencers" posting endless reviews and showcasing "lifestyles" utilizing the companies brands and products seems to be the norm.

Call me old-fashioned, but I appreciated the advertising of yesteryear.  Colorful, artfully designed posters and enamel (Email in German) signs were the mainstay of advertising for many decades, well before the advent television and the subsequent digital age.  In other words, long before there was email there was "Email".

Collectors of BMW motorcycles, myself included, are always on the look out for such items as they relate to, and can enhance, a motorcycle collection.  Advertising provides context to the experience of owning, restoring and sharing the wonderful machines from Munich.

Below are two examples of BMW enamel signs.  Both are original and in "New Old Stock" (NOS) condition.  I was lucky enough to purchase them from a defunct dealership here in the US that operated from the 1950's through the mid 1980's.

Each sign is 60cm in diameter and of convex metal construction.  Enamel provided longevity for these signs that were often nailed or screwed to the outside of dealerships.

The earlier of the two signs employs the older, serif, font with the lettering in yellow.  Notice also that the blue is a darker, richer hue than the later style.  I do not know the exact years of production of this version.

The later sign is of nearly identical construction but employs the sans-serif font, and a lighter blue.  Curiously, the mounting hole pattern is different between the two versions. 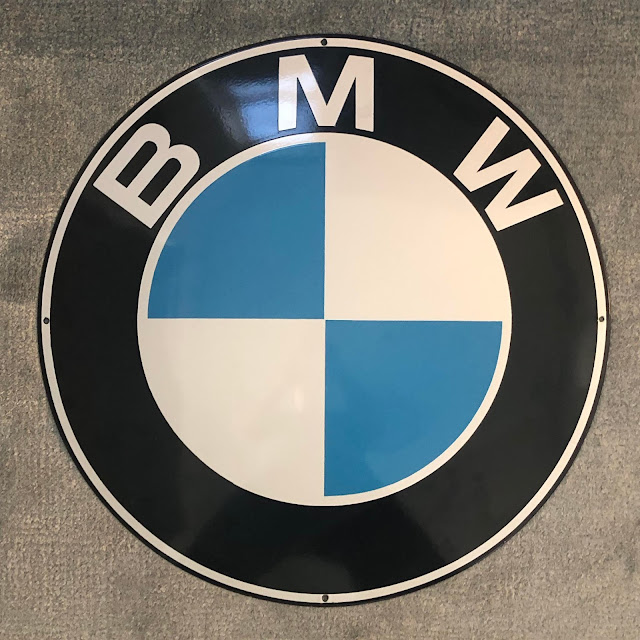 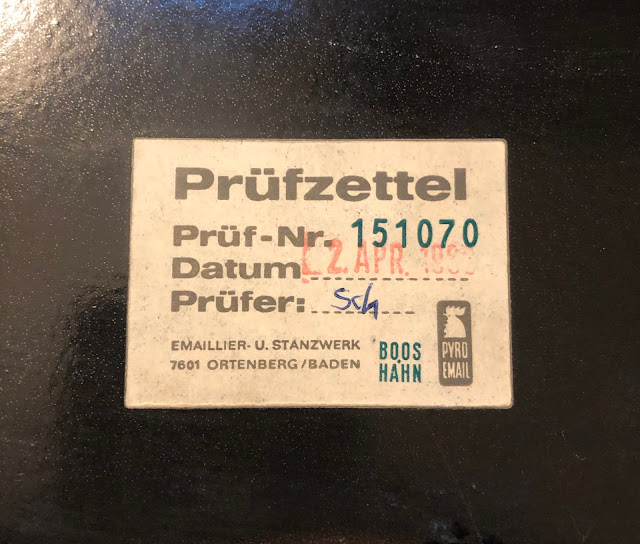 The firm of Boos-Hahn, the maker of the later sign, was an enamel specialist in the town of Ortenberg, Baden-Wurttenberg.  Founded by Wilhelm Boos and Anton Hahn around the time of the first World War, the company specialized in the production of enamel signs for industry and advertising.  Their work, especially as it pertains advertising, is sought amongst collectors.

I am sure that these signs came in other variations.  I have seen smaller versions of the earlier yellow, serif type sign. I have also seen the later style sign as a clock.   Of course there is no shortage of reproduction signs in the marketplace.  Original signs tend to have chips and some missing enamel.  Often discoloration related to weathering can be seen as well.   I provide the above information to educate those looking to purchase a genuine sign as an aide in evaluating its authenticity.

Posted by Scott Williams at 3:09 PM No comments: