This post will serve as a followup to some recent articles in the VMCA club newsletter.  If you are a vintage BMW enthusiast, you owe it to yourself to join the two clubs here in the states devoted to vintage BMW motorcycles, the BMW VMCA and the VBMWMO.

At the onset of WWII, the German army was supplied with sidecar machines in the form of the R12, and to a lesser extent the R71.  Midway through the war, BMW introduced the purpose built R75.  A robust OHV pushrod engine with 750 cc displacement, coupled with a complex, low geared gearbox, sporting on and off road gearing, as well as reverse, the machine proved its worth on the battlefield. It was a true GS (Gelande Strasse).  There was ample power to pull 3 passengers, often with machine gun mounted.  Occasionally small utility or ammo trailers were fitted to the rear.

At the conclusion of the war motorcycle production in Germany ceased.  It wasn't until 1948 that BMW was again allowed to produce motorcycles, however displacement was limited to 250 cc.  The R24, based on the prewar R23 design was produced for two years before Allied forces eased restrictions, and the twin cam 500 cc R51/2 was added to the BMW line-up.

The racing motorcycles that survived the war (many by being hidden underground, or in hay lofts) were unearthed and circled Teutonic tracks once again.

Those wishing to compete in larger displacement categories, or sidecar divisions, had no options as far as new production. Many ingenious riders took to modifying the well constructed R75WH sidecar motors and placed them in either pre-war or post war plunger frames.

These bikes have been called many things, with monikers including R73 (a cross between an R71 and R75) as well as R51/75.  Such bikes were successfully campaigned in solo and sidecar classes. 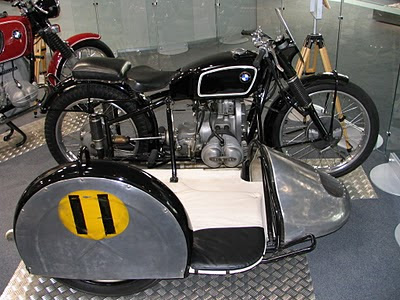 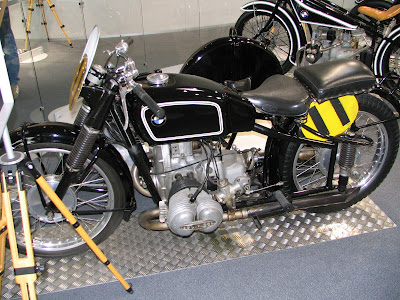 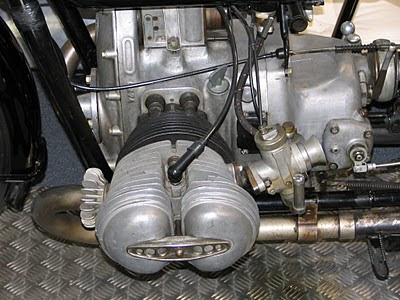 In the example above you'll note embossed OZ74 below the serial number on the crank case housing, indicating its production during war time.  The Amal Fischer carbs used on this bike required the use of a special made adaptor as shown. The gearbox no doubt houses a special ratio for sidecar racing.  This particular housing having started life as a civilian model.  It is easy to see where the air filter mounting has been cut off, being obsolete once carbs with velocity stacks have been added.  For this reason, the 1936 R5 style gearbox housing is favored for racing applications.

Also, note the faltenbalge used on the front forks and rear suspension as a weight saving measure.

Typical of the period would be the use of open megaphone exhaust.  Special gas tanks were either fabricated, or sourced from local craftsmen in Munich, such as Lugauer, who supplied sheet metal to the BMW Works. Sidecar machines often employed larger capacity tanks, as expected. 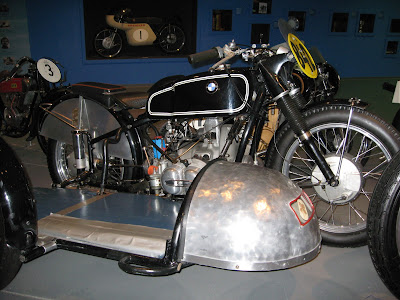 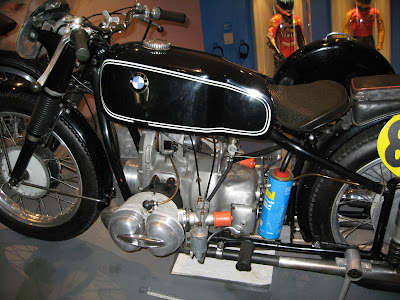 Unlike many pre- and post war BMW motorcycles, the R75 motor does not easily drop into a plunger frame without some frame modification.  The front engine bolt on the R75 actually goes through a boss in the front engine timing cover, instead of the bottom of the crankcase as is typical for pre- and post war plunger motors. As such, one needs to weld to the frame a point of attachment for the front motor mount bolt.

Below are some pictures of a privateer racer with German pedigree.  For more information you can check out RCS Racing 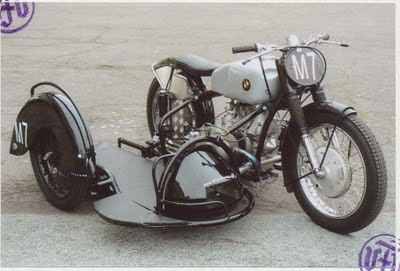 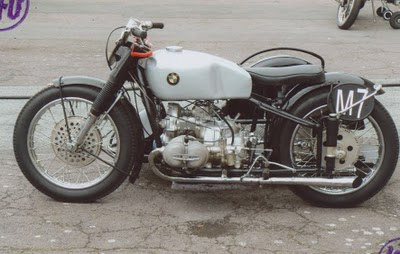 In a future post I will detail the subtle nuances of my R51/75, which are more than they would appear at first.  I will also provide some interesting history and some video of the bike in action.
Posted by Scott Williams at 4:12 PM 3 comments:

Of course the production road models before the war used metal shrouds or housings to conceal the inner workings. This practice continued in the early post war years on the twins including the R51/2 and R68.   In late 1952 after the production of the first 300 or so R68's had rolled off the assembly line, a modification was made when the use of rubber gaiters on the front forks became standard.  This was the practice until 1955 when the R50 and R60 were introduced with the Earles fork front end.

The front gaiter was reintroduced by BMW on the R60US and R69US just prior to the major redesign and introduction of the /5 series.

Of historical note, and particular interest to people like me who dwell in minutia, is the clever use of rubber gaiters on an Earles fork equipped bike as show here, piloted by Anke-Eve Goldmann. (Photo from thevintagent)

For those interested there is a fantastic article on the history of BMW forks in
BMW Motorcycle Magazine, issue No. 5.  Unfortunately they are sold out of back issues, so borrow a copy from a friend!

The aluminum rings and rubber gaiters were available through Schorsch Meier's parts catalogue.  Whether or not other purveyors of aftermarket "teile und zubehör" such as Ernst Hoske had them available, I do not know. 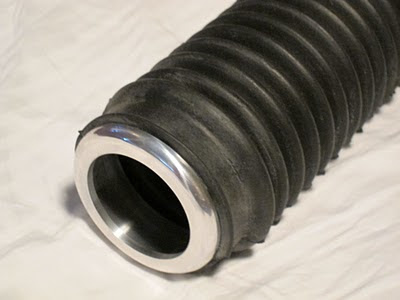 While the aluminum  rings aren't currently available, the rubber gaiters are easy to source from any British motorcycle parts supplier.  The Triumph/BSA part number is 97-1645.  If there is enough interest, I would consider having the aluminum rings reproduced.

If/when I have time, I'll weigh the components of the rubber gaiter setup vs the original metal cans, and see if there is, in fact, any weight savings.  I, suspect there isn't, and there could even be a small weight penalty.  But you can't argue with cool!
Posted by Scott Williams at 12:44 PM 2 comments: 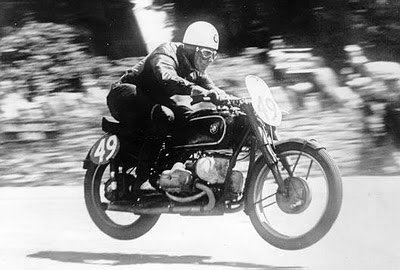 Georg "Schorsch" Meier needs no introduction to those familiar with the history of BMW motorcycles.  Meier is perhaps best known for his victory at the Isle of Mann in 1939 aboard the works Kompressor machine.  The iconic photo of Meier during the senior TT epitomizes the essence of prewar BMW technology.
There is a recently published book by noted author and BMW expert Stefan Knittel entitled "Georg 'Schorsch' Meier: Sein Leben in Bildern".  (Translation: "Georg 'Schorsch' Meier: His Life in Pictures".  The book is wonderful and outlines Meiers life from his formative years, early racing career, time with Auto Union and post war business ventures.  Of course great consideration is given to his motorcycle racing for the BMW works team before and after the war.
﻿﻿﻿﻿﻿ 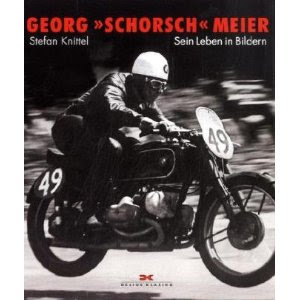 ﻿﻿﻿﻿﻿
After the war, while continuing to race, Meier turned his attention to business ventures.  He opened a motorcycle shop in 1949 selling motorcycles, parts and tires. A digital copy of  the "Schorsch Meier Prospekt" is below: 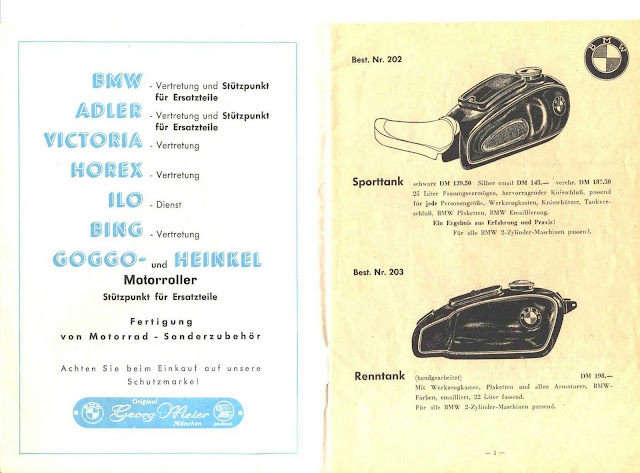 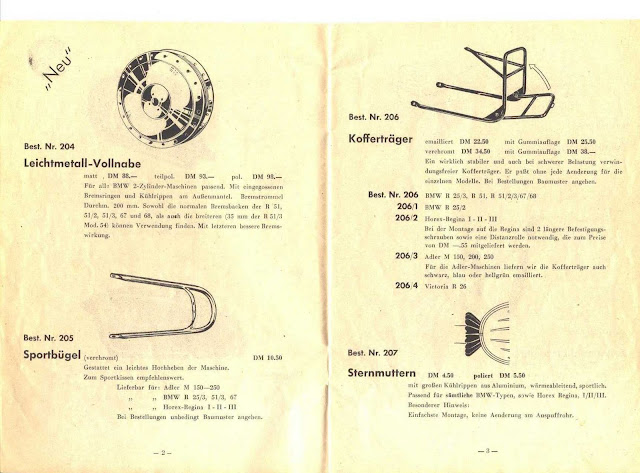 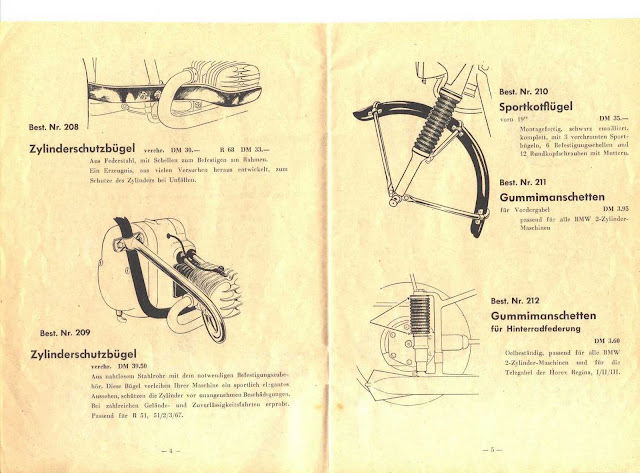 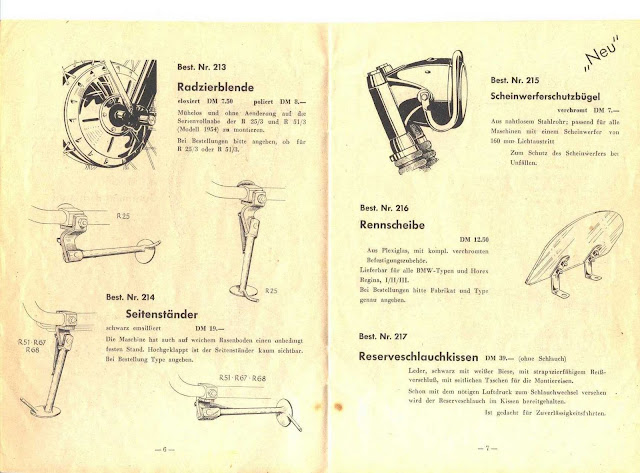 Sport riders and gentleman racers of the day could outfit their run-of-the-mill BMW with a host of performance parts and accessories.  On page six of the prospect is a rather interesting item.  The "radzierblende" hub cap with flared out slots for brake cooling.  A fantastic idea, though I have never seen a set in real life.
Posted by Scott Williams at 9:53 AM No comments: