Troy Corser and Herbert Schwab did the unthinkable.  Day two saw Herbert Schwab get away cleanly at the start of the Barry Sheene trophy race  He turned in very quick laps and kept the R57 Kompressor BMW within striking distance of the leaders English and McGuinness on the Manx Norton.  After the rider change Corser put the hammer down, turning in fastest lap and whittling the lead down from 17 seconds to just over 3 seconds in a matter of only a couple laps.  Then just after the chicane, Corser eases past McGuiness, giving him a tap on the back-side.  A combination of "here I am" and "bet you didn't see this coming."  Corser went on to win day two with a comfortable lead.

Meanwhile Sebastian Gutsch and Klaus Ottlinger did a fantastic job aboard Sebastian's R5SS.  Starting from 9th position on the grid, Sebastian passed several riders on the first lap and had the bike up into third before the rider change.  Ottlinger fought hard and the duo ended up 5th on the day.  A tremendous result for a normally aspirated true 500cc pre-war bike!


Posted by Scott Williams at 12:01 PM No comments:

Absolutely amazing race day1 for the Barry Sheene trophy at Goodwood Revival 2018.  The BMW R57 Kompressor, piloted by Troy Corser and Herbert Schwab, managed third step on the podium for the first of two events, even after trouble at the start.

As is seen in the video, Goodwood features a LeMans start.  Riders dash across the track and hop aboard the already running bikes.  However it appears as though there was a hiccup and the R57 was near last getting away from the pit wall.  Corser, none-the-less caught up quickly, eventually taking the lead away from the Manx Norton.

Timing and scoring lists the bike as an R5SS, but it's in fact an OHV R57 with Kompressor.  Much more primitive a chassis as compared to the R5.  While both machines are hard tails, the R57 is much less rigid and utilizes a leaf spring suspension up front, and simple coil springs under the saddle at the rear.  You can see just how squirrelly the bike is at speed from the video below.  On top of that, its HAND SHIFT, not foot shift.  You can see Corser reaching across the tank with his left hand to downshift as he makes his way into to the pit for the rider change.   A practical update on the bike is a twist throttle instead of the lever throttle as originally equipped on the road going R57.

Posted by Scott Williams at 11:24 AM No comments:

Like most vehicle manufacturers of the day, BMW did not produce its own tachometers for race bikes.  Rather, the task was out-sourced to premier instrument makers.

In the pre-war period, this job fell to Robert Muhle and Sohn of Glashutte, Germany. Muhle tachs were sourced for use on the BMW Type 255 Kompressor, as well as the twin cam racer R51RS.   Interestingly, the company remains in business, producing high end wrist watches.  Its no surprise then that a peak inside one of these instruments would have one believing that were viewing a ship chronometer.

For the post-war Type 253 (colloquially known as the RS54), the original long stroke version was fitted with a 60mm VDO, complete with a weighted and balanced needle.

On the works bike, and later privateer RS54's, the more commonly found tachometer is a Smith's ATRC.  Generally considered to be the Rolls Royce of instruments, the ATRC were required to be mounted in a special vibration dampening holder. It was essentially a bezel mount connected to the instrument by means of large rubber O-ring.


Of interest, there was two ways to run the tach on the RS54.  Both a straight drive from the timing gear, or an angled drive from the front of the crank.  The straight drive is commonly found on solo machines, while the angle drive is more common to side cars, and the works type racer.  The works motors were occasionally fitted with a Bosch fuel injector which was driven by the timing gear shaft.  Therefore, the tach drive had to be relocated, and furthermore this allowed for clearance of the cable.

Posted by Scott Williams at 7:30 PM No comments:

Buchanan's Does it Again

Special thanks to the guys at Buchanan's Spoke and Rim in Azusa, CA!  They went the extra mile getting the wheels for one of my race bikes built.  I love this setup.  Borrani Record rim mated to a magnesium Fontana 230 doppelduplex from brake, complete with magnesium shoes.  And of course Metzler tire. Aluminum nipples, stainless spokes.  Perfectly balanced as built without weights!  Thanks again guys. 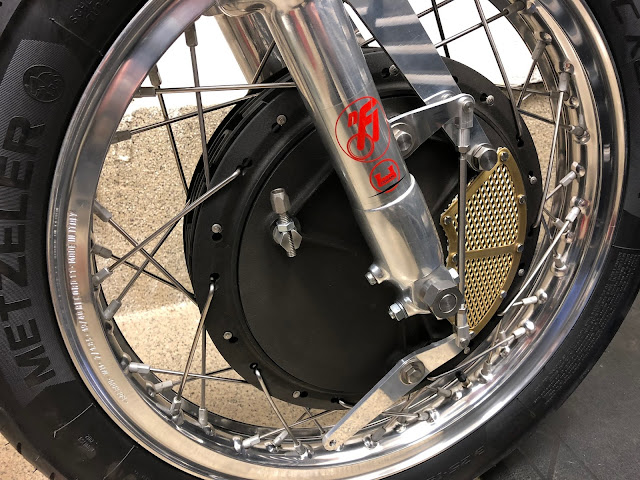 Posted by Scott Williams at 10:46 AM No comments: