RIP Joachim Groeger - The Passing of a Legend


It is with great sadness that I announce the passing of Joachim "Joe" Groeger, just three weeks shy of his 100th birthday.

In the paragraphs below, I will attempt to relay a bit of Joe's life story which I gathered from stories he told me over countless breakfasts, and hours in his shop "Groeger Special Tooling".

Joachim “Joe” Groeger was born in 1920 in the town of Nakel on the river Netze, which at the time was a part of Germany.  (The town currently resides within the Polish border.)  Not long after he was born, his family relocated to the sea-side town of Seestadt Wismar, on the Baltic Coast where he spent his formative years.

Growing up, Joe was fascinated with all things mechanical, a trait he inherited from his father.  Joes father had served in world war one, during which time he was in charge of railway operations.  This proved useful in the postwar times where as an agricultural supervisor for a large producer of sugar beets, Joe’s father helped to maintain the rail system put in place to move produce from field to factory.  Family pressure had initially set Joe’s father on the path to be a lawyer, however a strong desire to work outdoors lead him away from law school and into a profession as an agricultural engineer charged with maintaining and monitoring the “health” of sugar beets, a staple crop in Germany at the time.

This task required much time spent in the field carefully monitoring the plants for disease or infestation, which necessitated countless trips deep into the vast field of sugar beets.  The trips were made easier by the use of a motorbike, an R11 which Joe fondly remembers riding two-up with his dad.  As a young boy he was not allowed to ride the bike on any regular basis, but did fire up the machine on one occasion to put it away in the garden shed across the street from the family home where it was kept.

It was from the shed in 1942 that German officers relieved the bike of its tires for use in the war effort.  As Joe recalls it didn’t matter much since gas was essentially unobtainable by that time anyway.

Three years later the bike met with an auspicious end when a neighbor gave up the location of the tire-less motorbike to two American GI’s in exchange for two loaves of bread.  Joe recalls that the American soldiers took it apart and boxed it up for shipment back home.  It would be many more years however before Joe would eventually own a BMW of his own.

As a young boy Joe was fascintated with flight.  Aviation was still a relatively new field at the time and the Germans as well as the Americans were captivated with building stronger, faster, more reliable aircraft.  As a teen, he was given the opportunity to attend glider school.  It was there that he learned to design, build and fly aluminum clad wooden gliders.  This experience paved the way for an apprenticeship at Dornier Flugzeugwerke Wismar, then one of the larger aircraft manufacturers in Germany.  It was at Dornier that Joe began his mastery of metal craft, applying his skills not as a common laborer, but as an engineer designing tooling, dies, etc.  It was his uncommon vision for design that helped him escape the front lines when Germany was at war with the Allies.

Proving too valuable as a designer, Joe was given a “pass” each time the German army came to the factory looking for new “recruits”.  It wasn’t until April of 1945, when Dornier Werke was leveled by two Allied bombs, that Joe was eventually drafted into the army.  After attending basic training in Copenhagen, then under German control, he was given a rifle and sent into action.  Thankfully it was not long before the war was to end and Joe was able to safely return home.

After the war, Joe switched gears so to speak.   Obviously all heavy industry, including the manufacture of aircraft, ceased to exist after the war.  Joe eventually went to work for a town jeweler doing watch repair and ultimately became a certified journeyman watchmaker.

At the time Joe was living in Braunschweig, home to Franke and Heidecke.  Shutterbugs will know this company as the maker of the Rolleiflex line of cameras.  Having an interest in all things mechanical, Joe took a position at the company. At a time when it generally took 20+ years of dedication to a company to move up the ranks, Joe leap-frogged his way to the top in no time.  His ability to envision new concepts and ideas was identified by Dr. Heidecke who promoted Joe to the experimental lab where Joe was free to experiment with new designs and techniques.  He developed one of the first mechanical timer shutter release mechanisms.  No doubt his watch making skills came in handy.  It was at Franke and Heidecke where Joe first developed an interest in stereocameras, an interest that he maintained throughout the rest of his life.

While working for Franke and Heidecke, it came to light through the company that there was an outfit counterfeiting camera parts that were patented.  The rumor was that the parts may have been coming from the US, and San Francisco in particular.  Joe was asked by the company to “snoop around” and see if he couldn’t find the source.  It was this task that lead Joe to the Bay Area, and ultimately a new chapter in his life.


After working for a while in San Francisco at a camera shop, Joe eventually moved to Redwood City where he would live out the remainder of his life.   He quickly found work as a tool and die maker, and eventually opened his own tool and die shop, Groeger Special Tooling, which is still in business today.

Anyone who has been to San Francisco knows that the often narrow and hilly streets, congested with traffic, can be difficult to navigate.  It’s no surprise then that the city was, and still is, home to innumerable motorcycle enthusiasts who find two wheeled transportation easier and more affordable than the four wheeled alternative.  In 1956 Joe purchased his first real motorcycle, an R50.  (While living in Germany Joe had owned a Wanderer moped.)  In the 1950's, Joe's R50 was a "new" bike, providing reliable transportation for him and his young family.  It wasn't until the sixties that Joe undertook his first BMW motorcycle restoration.

Most BMW enthusiasts can remember back to the one fateful moment when they were bit by the BMW bug, contracting was has been known as the “white and blue flu”.  For Joe it was an auspicious beginning.

A friend had told him of an abandoned BMW R51/3 near the coast.  His friends "hippy" brother had parked it, leaned up against a barn, a few years prior.  The cost of the bike was a tank full of gas for his friend’s truck in order to retrieve the motorcycle.

Joe recounted to me vividly how dilapidated the bike was.  The San Francisco climate can be rough on bikes that are properly stored inside, and can wreak havoc on one left outdoors to the elements.  Once Joe freed the bike from its cocoon of weeds and overgrowth, he and his son hoisted it into the back of the truck.  Joe recalled that when they went to lift up on the handlebars, they folded in half from the rust that had eaten its way clear through.

After a thorough cleaning at the local car wash, Joe set about to getting the bike running. He was astounded how good a condition the bike was internally.  With the front engine cover removed, he noted the inside looked fresh and unfazed by the years of neglect.  After some fresh gas and oil, and with some adjustment of the timing, Joe was able to fire the bike up, much to his astonishment.

And so began an era of Joe's involvment in the "vintage" BMW scene.  Over the ensuing decades Joe became well known as the go-to guy for help with pre-1970's BMWs in the Bay Area.  Joe's ingenuity led to the development of many special tools for working on the old bikes.  As a tool and die maker, he often produced parts that were no longer available at the time.  When parts weren't available, or weren't affordable, Joe would make them.  He even supplied parts to many of the vintage dealers in the states and Germany.

I still remember vividly the day I first met Joe.  It was 2001, and I had recently moved to Palo Alto to begin my Radiology Residency at Stanford.  A couple years earlier, I had accompanied a friend who purschased a /2 from Bob's BMW in Maryland.  I had never seen an old BMW motorcycle before that and I immediately resigned myself to one day owning a vintage BMW as well.

After scraping together some money, I purchased a complete, but very delapidated 1961 R69S from a fellow in Washington state.  Not having any past experience in motorcycle restoration, I began seaching this "new" thing called the internet.  This led me to Marco Hyman's restoration website snafu.org (we'd now call it a Blog I suppose).  Marco said to meet up at Groeger Special Tooling on Saturday, so I put the bike in the back of my pickup and headed to Joe's shop.  By mid day Saturday we had the engine started, and by the end of the day, we began tearing down the bike for complete restoration.

Over the ensuing 2 years I would spend a great deal of time at the shop restoring the bike under Joe's watchful eye.  As I had worked in a machine shop in college, I was somewhat familiar with machining, but my knowledge and experience grew significantly with Joe's tutelage.

I am forever grateful to Joe.  Without him I would not have been introduced to what has now become a wonderful hobby.  The people I've met and the friends I've made in the vintage BMW community have enriched my life tremendously along the way.

So long my friend.  Rest in peace. 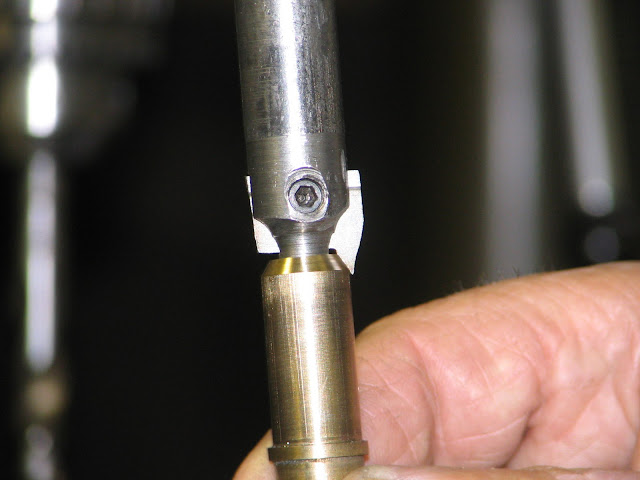 A funny memory I have from years of working in Joe's shop was his fondness for classical music.  He often had Chopin, Beethoven, Tchaikovsky, etc. playing in the background.  I once asked Joe's cousin Volkhard if he thought Joe would mind if we played some classic country music like Willie Nelson.  Volkhard told me that Joe absolutely forbaid the playing of Willie Nelson in the shop.  I asked why, and he told me that Willie Nelson once smoked pot on the steps of the state capitol, and since that day Willie's music was "verboten"!

Posted by Scott Williams at 8:32 AM