Some time ago I shared a number of photos of BMW Works kompressor bikes.  These are mostly in museums, with a handful in private collections.  I thought I would also share some pictures of Rennsports or RS54's.

In 1953, BMW introduced a low number production race bike.  It was intended for serious privateer racers.  The machine ultimately produced was the evolution of a series of engines based on the overhead cam design. This design exercise began in the late 40's, and arose from the need to find a replacement for the aging pre-war kompressor motors, which ceased to be as effective when the FIM banned supercharging after the war.  For a nice description, reference the book "BMW Engines" by Dr. Karlheinz Lange.

The original production of RS54's consisted of approximately 25 bikes.  These were long stroke machines, having a bore of 66 mm and a stroke of 72 mm.  The bikes were originally equipped with a 4 speed gear box.

Later developments lead to production of a short stroke machine with a bore of 70 mm and a stroke of 66 mm.  The shorter stroke motor revved higher and provided more horsepower.  The short stroke motor was initially used on the works bikes, but was successfully utilized later by quite a number of sidecar racers who took home a long string of championships in the 60's and 70's. 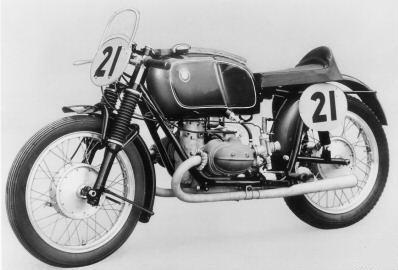 Here is an early photo of a pre-production or works model.  Several differences are evident when compared to the bike that was ultimately produced as what we now refer to as the RS54.  This particular bike is colloquially known as the "Zweibolzen".  Note that there are "two bolts" fixing the valve covers to the heads.  The later RS54 utilitzed four bolts.  The motor is actually quite different in form.  Also note the telescopic forks fitted here.  Ultimately, a decision was made to utilize the Earles fork on the production RS54.  A year later the Earles fork also showed up on the newly redesigned sport and touring models, the R50, R60 and R69. 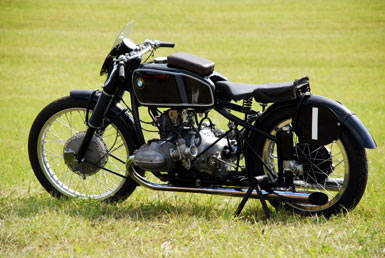 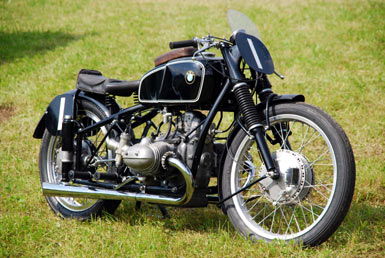 Above pictured is a restored Zweibolzen from the collection of Franz Amering in Austria.  Photos from MVCA.at.   The frame pictured here appears to be a modified plunger frame.  As we will see shortly, the production RS54 utilized a totally new frame design with a rear swingarm that enclosed the driveshaft.  However, unlike later civilian models, the rear swing arm of the RS54 does not contain oil.

﻿
The Zweibolzen motor was further developed and refined, ultimately into the production RS54 of which somewhere around 25 were built originally.

Perhaps one of the most original appearing bikes in existence today belongs to BMW and is housed at the BMW Classic building on BMW Allee just off Schleissheimerstrasse in Munich.  I had seen and photographed the bike there on a prior occasion.  I saw the bike again at the Saisonstart Open House at Niederlassung BMW.  Its a nice event they throw each year to kick off the riding season in March.

It is difficult to tell outwardly whether it is a long stroke, or short stroke motor.  I'm sure someone more knowledgeable than me might be able to tell. 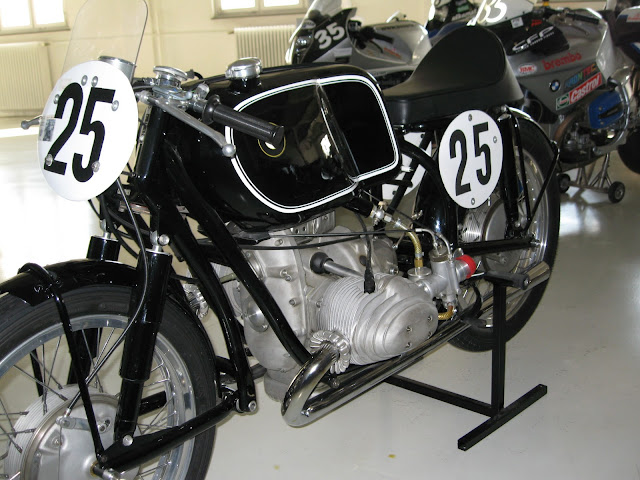 Posted by Scott Williams at 7:35 AM